Today I am going to release the Kanger Protank 3.  Before you buy, its important that you know the facts.  Kanger has very intelligently made the Protank heads inter-compatible for a long time.  Considering the Protank and eVod heads are even iterations of a early T3 bottom coil this head type has been around over a year! (Literally its a year old)

This means that some people are going to buy assuming the compatibility is still there and/or that the technology producing vapor has changed very little.  This is not just a shape change like T3>T3S or a connector change like T3>Protank.  Its an internal change to the way vapor is produced AND a compatibility change, there are two coils inside one atomizer and the atomizer is a bit taller.  Its important that buyers know this and have a reasonable expectation out of the gate.

I didn’t mean to confuse you, but if your confused then now you understand where I am going.

NOTE2:  I will have a vapor production video tomorrow or Monday for those who are curious!

NOTE1:  If have no idea of the significance of the blog post. LOL Buy the Protank II or Protank II mini and save yourself a headache and skip this entire thing.  This is intended for Protank geeks.

Lets start with the main difference.   The head has stacked double coils, and is taller. 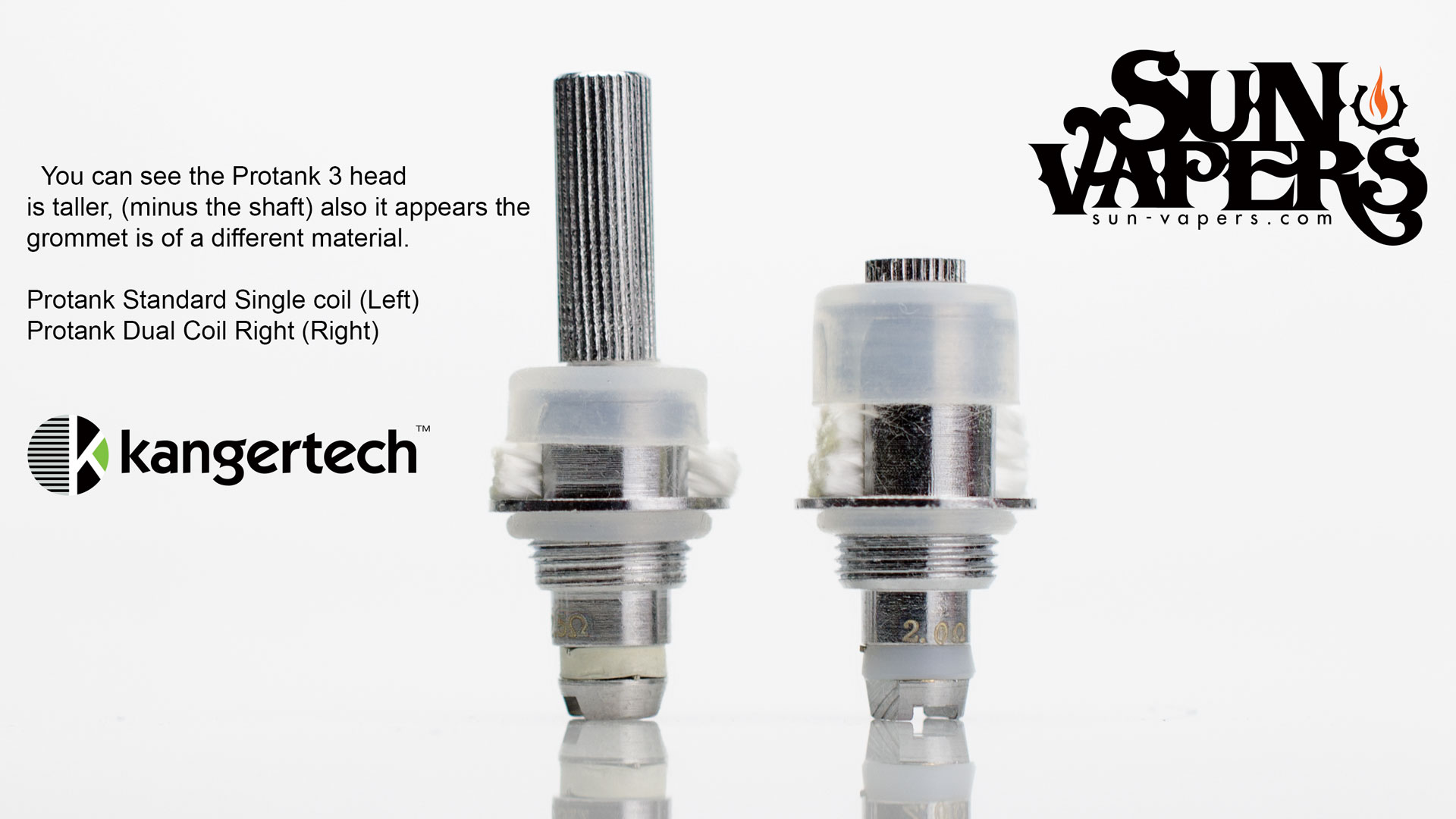 Looks like they when a different route with manufacturing.  I would assume the glass is backwards compatible but its just too early to say for sure.   I would bet money that these will use the same glass, but as a vendor selling the stuff I don’t want to over promise.  Think about how many vendors have made serious mistakes and have to apologize afterwards. “yeah its stainless steel” “yeah its pyrex” “Yeah its compatible”  If you buy the PT3, buy it as a stand alone unit.  I cant seem to find the original pyrex to compare with. 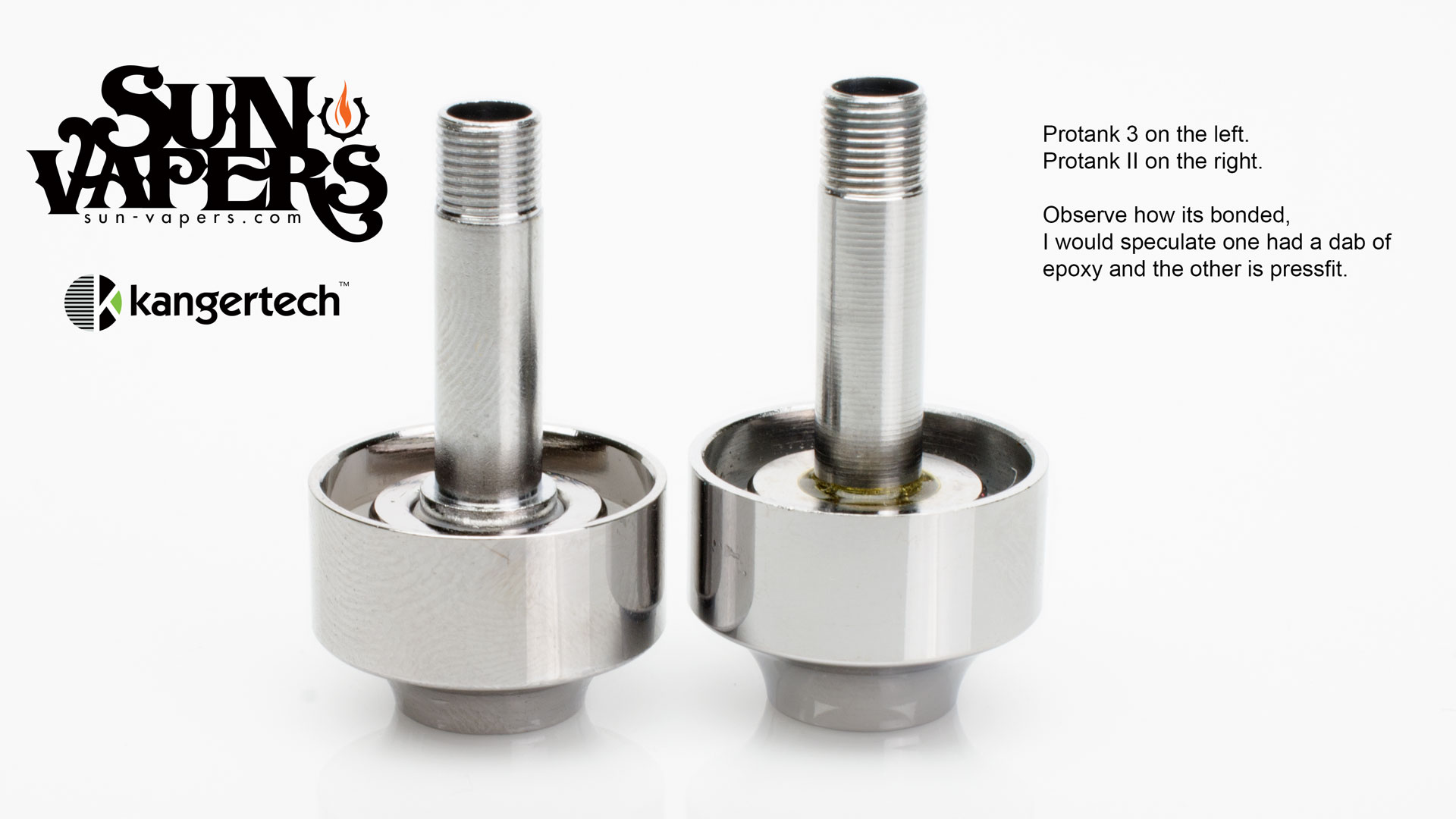 Here you can see that the lower portion of the Protank 3 has less metal to allow for a longer Protank Dual head.  Again I cant guarantee ANY backward compatibility.

A look inside the Protank 3 heads. Most of the Protank 3’s we sold had no issues.  We did come across one.  The Protank seemed to be overtighted onto the mod, but we are not sure if this is the cause of the malformed head internals.  This angle gives an excellent view of the coil and how its wrapped. 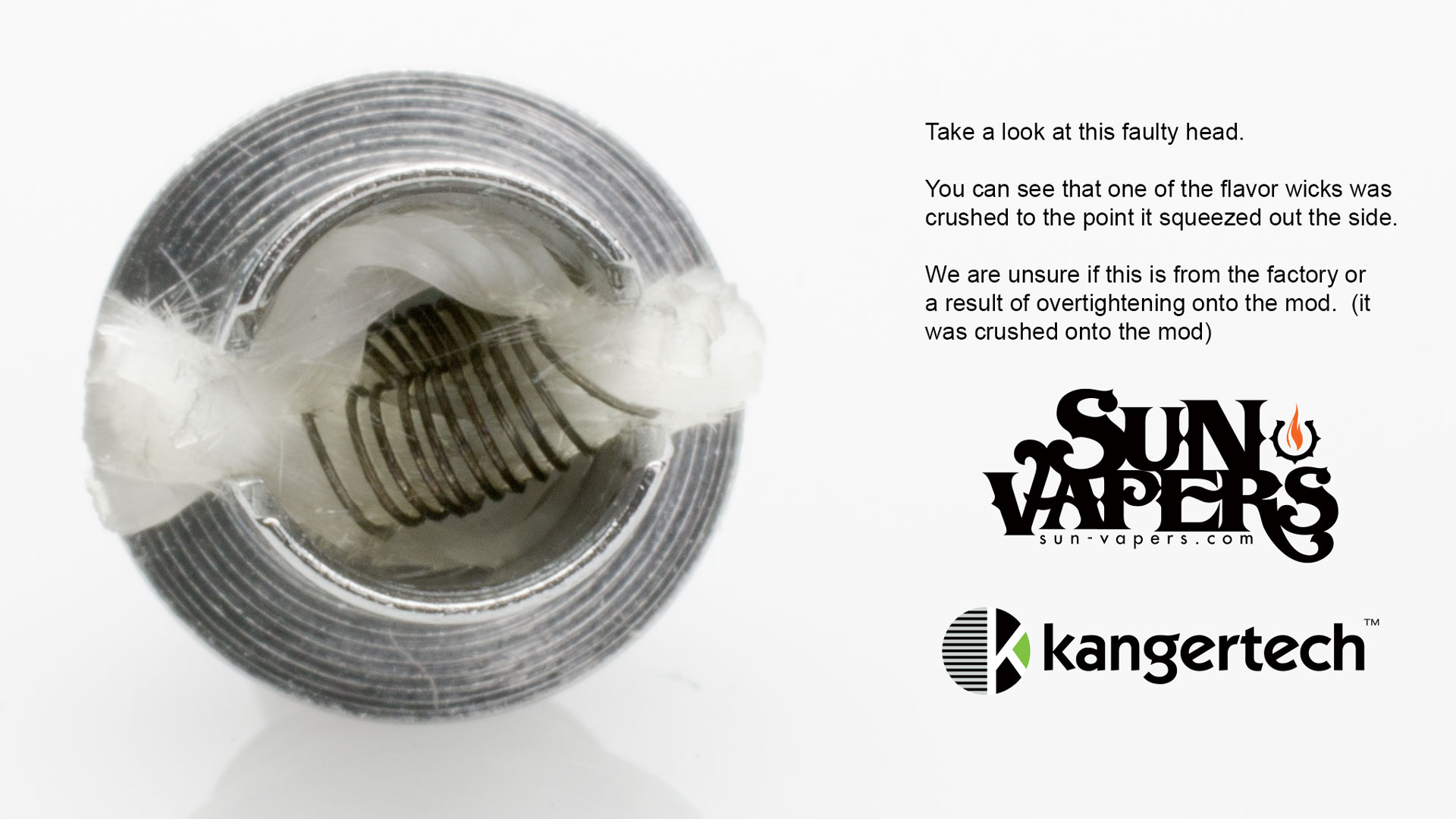 I don’t think there is a major difference in the bases other than a bit more threading. I checked out a couple bases I had and to be honest they all had tiny changes most likely not worth mentioning.   Until more is known, make sure you keep your PT3 base with your PT3. 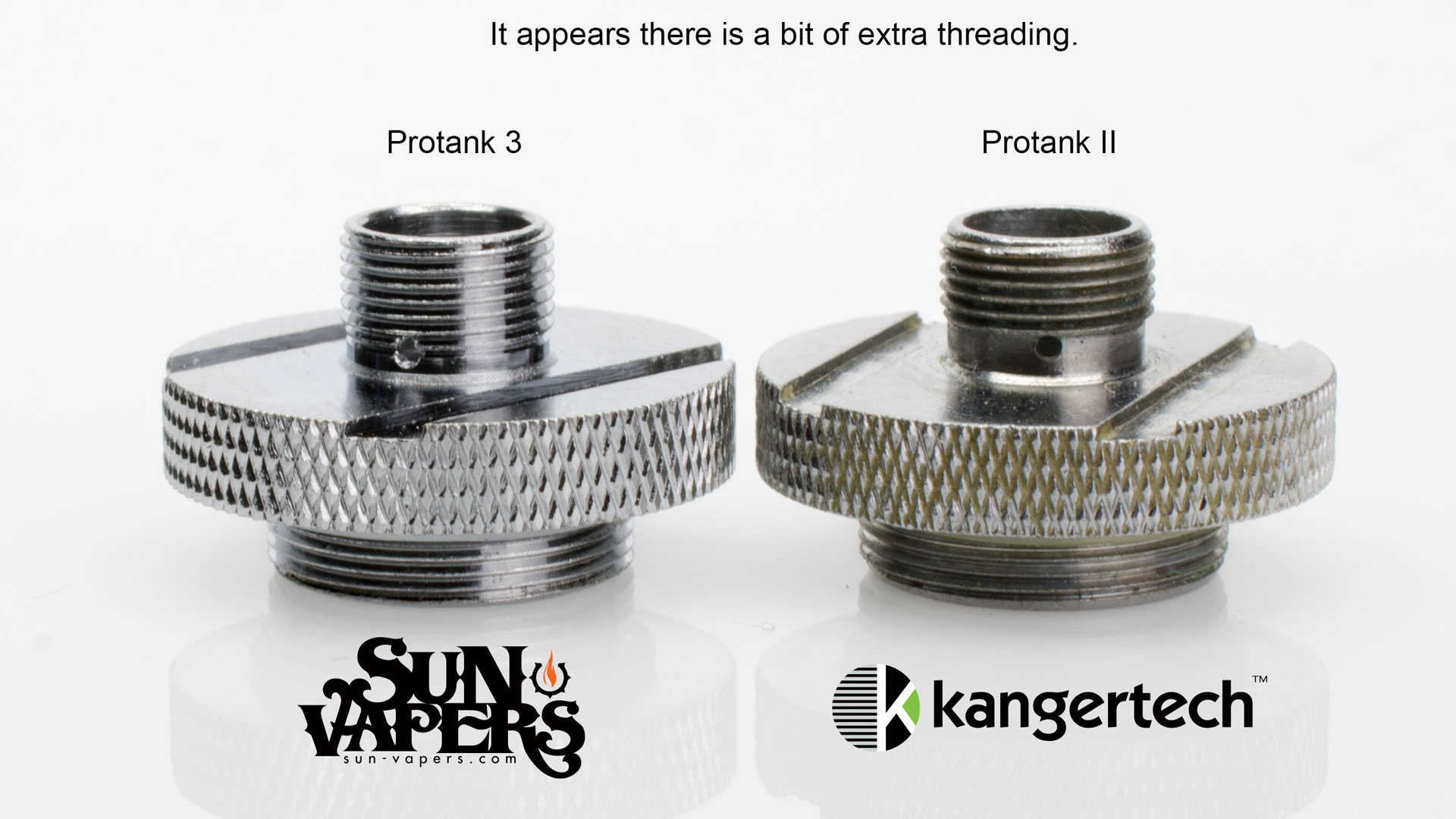 Lets take a look at the positive pins.  You will notice the shaved it down.  I believe this is because they are switching from a compressible rubber to a silicone that likes to squeeze out the sides rather than compress.  I’m thinking this stuff squeezing out the sides would clog the airflow on a PT3 510 if you tightened the head down too far with the silicone grommet. (The rubber seemed very compression friendly.)

Can I make any more of a case to get away from the eGo/510 connector.  I really dislike the 510. It forces too many compromises in design. Its an outdated connector that just baffles me every time I start to think about it. Kanger MAKE YOUR OWN CONNECTOR! 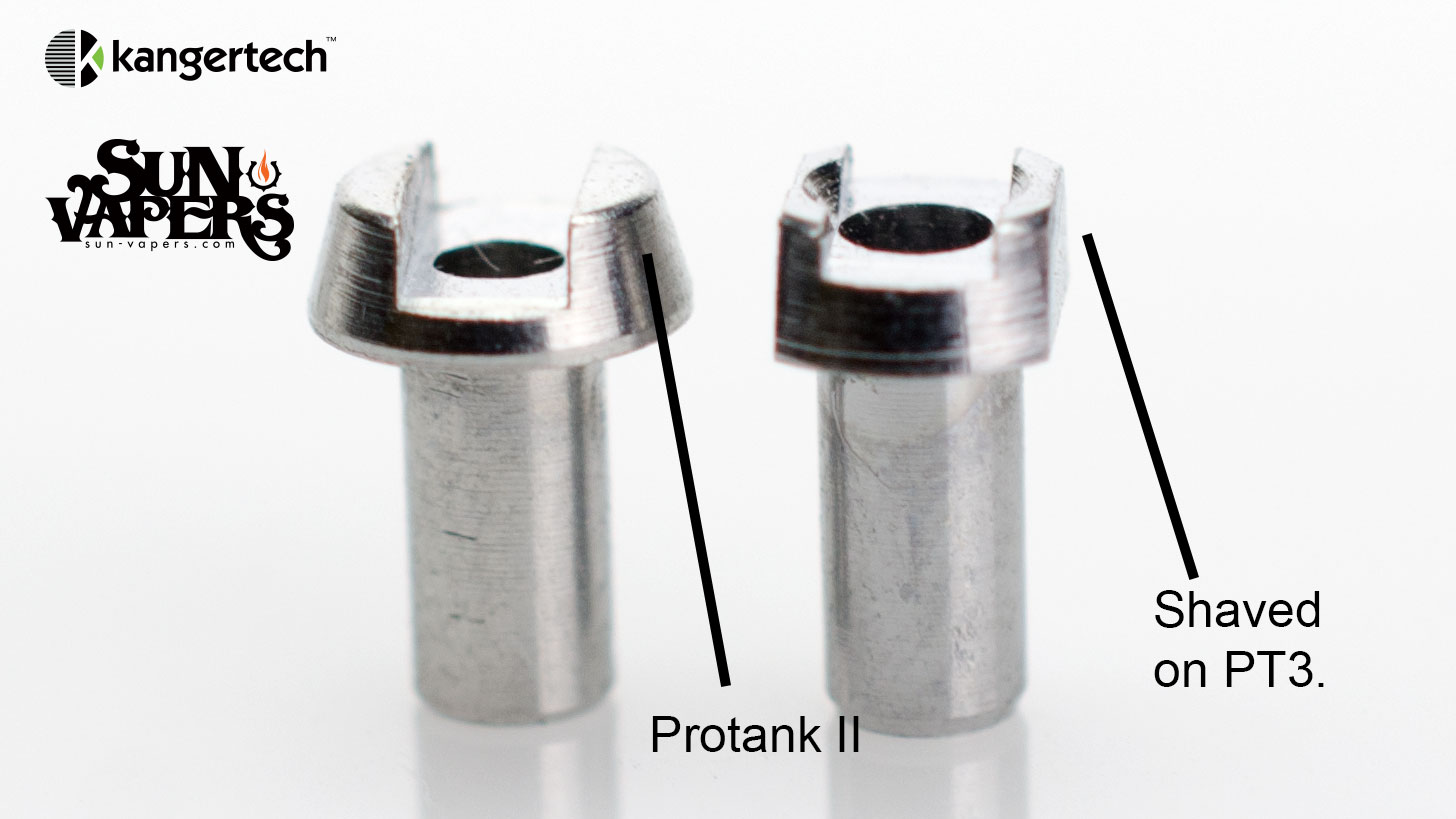 Well lets take a closer look at a photo we already have!  Its obvious that the material is different. 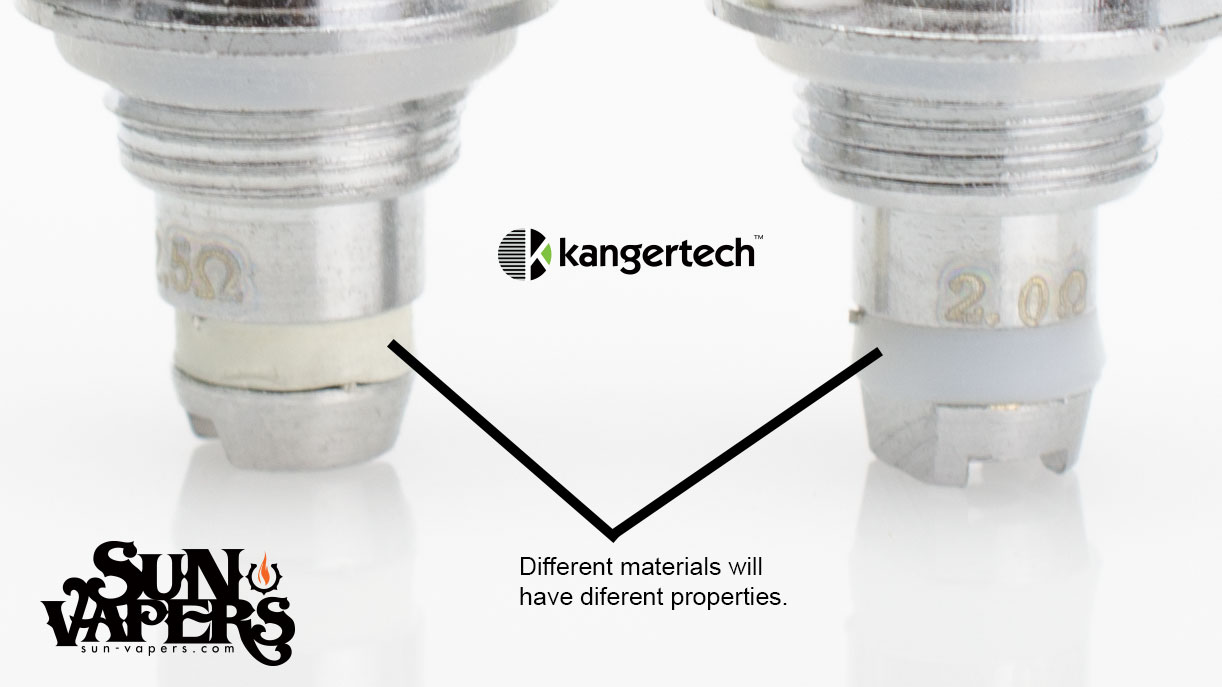 Now lets take a look at the built models and see what the differences are.  I kind of like where the prototype was going, but at the same time that design does not work will with after market drip tips. 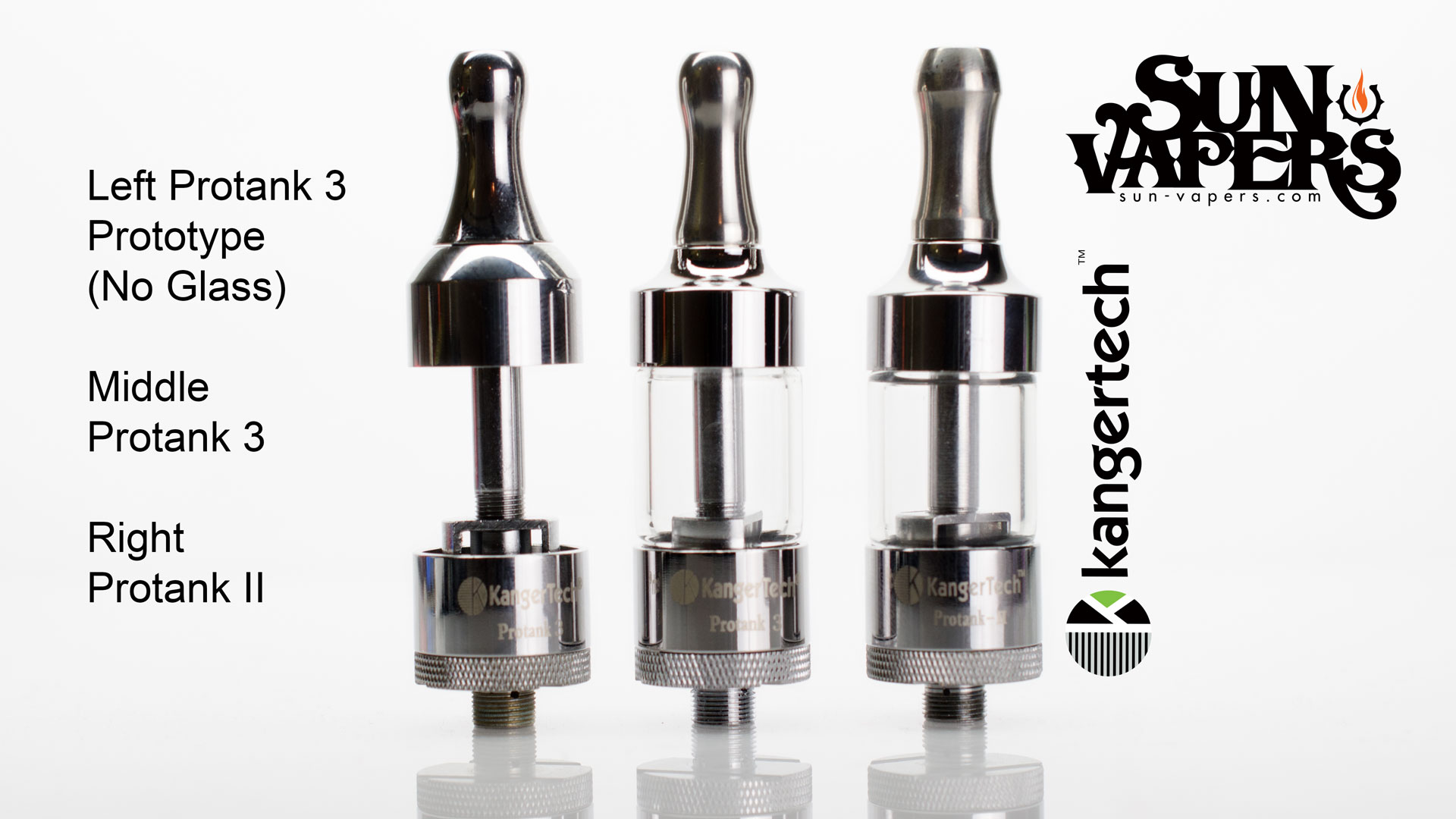 No doubt the first run of the Protank 3 is going to riddled with controversy.  As I type this my employees and customers are raving about the Protank 3.  When I received my Protank Prototype the vapor production and flavor was intense but it had a “misting” effect that I couldn’t tell if I liked or hated.

One of the other things that has been forgotten for a moment are the understanding of what a dual coil will mean. While its a 2.0 ohm atomizer it needs MORE voltage than a regular Protank.  This will surely throw newer vapers for a loop at first since it competes with the earlier information of lower ohm’s = lower voltage.

Where do I predict this going?

I have been following bottom coil stuff for a long time.  I knew to hold off on a blog since I was sure it would change.  (And I was spot on) I figure at this point, I know the industry fairly well and its neat to see a validation of my own prediction.    If I had to guess today I would say this product will start off rocky, the atomizer head will improve and then take off.  The newer bottom portion of the glass has more room I am sure the head will evolve from here. When the unit works, it seems to work amazingly well.  In other words its going to be popular for sure with the VV crowd with some time.

Things to watch out for!

Something tells me that silicone grommet is going to cause some issues down the line.  The material seems to be slick allowing the coil to move and it does not seem to be compression friendly possibly blocking airflow if someone tightens a mod down too much.  I would bet this was the advice of countless shops and it really only benefits the head re-builder not the plug and play vaper.

The short head with no grip.

Looks they may be trying to shrink the size of packaging with the shorter head. I wouldn’t mind this except that it makes it harder to screw onto a base. I think the long shaft works out well with the knurling.

Its going to improve I am sure if it!

If there is one thing I know about Kanger, they will improve the product, the potential is there and most of my customers are reporting only good things.  It does put out more vapor and flavor.   Give it some time and soon enough we will all be blown away.  (pun intended)

If you buy one, just buy one!

This is a atomizer that works best on a VV device with some power, I dont think a twist will cut it.  If you dont have a Provari or SVD it may seem like a serious under-performer.

Too many people see a product hit the shelves and buy 5 units and 25 heads.  Take your time, its not going to go away.  Buy 1 and see if you like it before blowing more cash.  Trying to reach the free shipping price is no savings if you hate the product.