Sun Vapers learned that fakes were being sold on ebay from a concerned user on Reddit.  We have purchased the same batteries and tested them ourselves just to see what a fake looks like and how it would perform if someone chose to ignore it. The first half of this will show pictures comparing a fake to a real Sony, and the last half will show its performance.

WARNING:  THIS BLOG IS DATED.  There are multiple fakes from various sources.  Some of the counterfeits look really close to the real VTC5 and they have begun cloning the VTC3 and VTC4 to circumvent scrutiny.   This blog should HELP you eliminate one version of the fake but you should do extra research if you are concerned.   All VTC are allegedly discontinued in a loose format for 2014 according to my supplier.  Thanks. 10/26/2014

The new SubTank Nano and Mini will arrive on the 20th.  You can find them here.

You can save up to 20%-30% on batteries, juice and hardware by signing up to our newsletter. 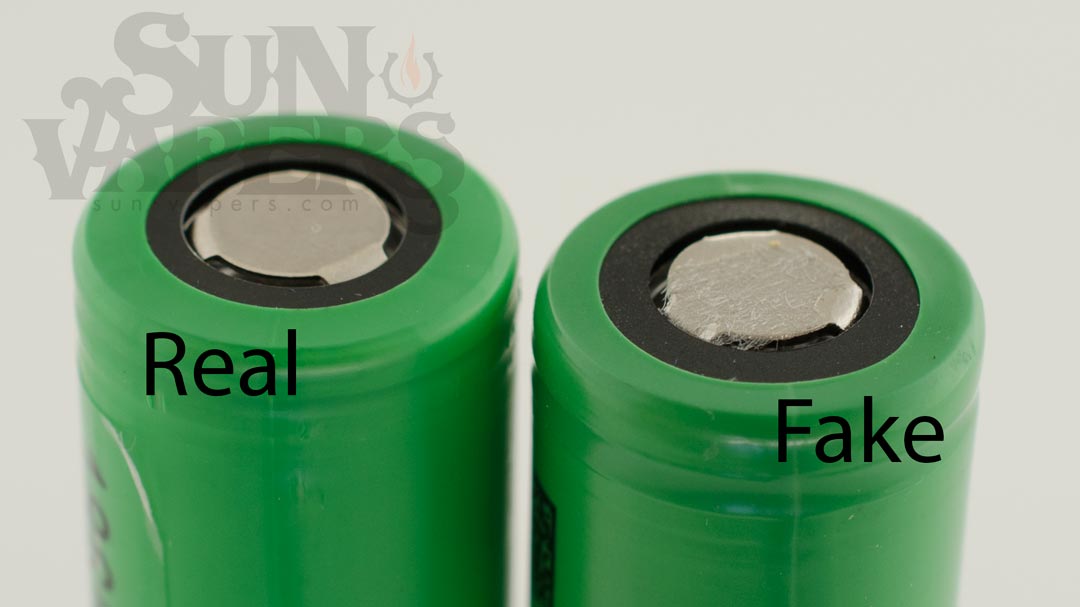 In the image there is not much to see, both fakes I have came with sticky stuff on the positive. The positive seems only slightly raised. But this difference was hard to photograph.

This part was more or less fun for me since I am a fan of batteries and what it could possibly mean for our future.   Honestly the battery itself is NOT TERRIBLE it works and will probably get the job done if needed.

The issue is the lack of credibility, we just don’t know how dangerous it could be and because of the credibility issue can we ever trust what the manufacturer would claim???? It does not produce 2.6 Ah and at 30 amps it WILL get super hot.

I have tested the battery and compared it to a real Sony VTC5!

This will continue to happen, as time goes by I am not surprised.  The vape community loves counterfeits and I would say in my experience this is the first industry where the majority of users love counterfeits more than the idea men who created the brands the fakes attempt to imitate. And because of that everyone is jumping on the fake bandwagon!  I have so many emails of just fake product even of other Chinese companies!!!  The question I have is when are e-lqiuids going to start being counterfeited?  HAHA Peace out!

23 thoughts on “How to Spot a Fake Sony VTC5 battery.”