Sun-Vapers takes a look at the MNKE battery and compares it with the last winner.  We will provide our own commentary but you really should judge for yourself.  If you want to see the Efest vs Sony shootout click here.

20A shootout is a quick look at its output under constant load.

The 20A discharge test is far different than the sub ohm load.  The battery tester will constantly keep the batteries draining at 20 amps. The sub ohms tests start off strong and then amperage lessens up as voltage decreases. 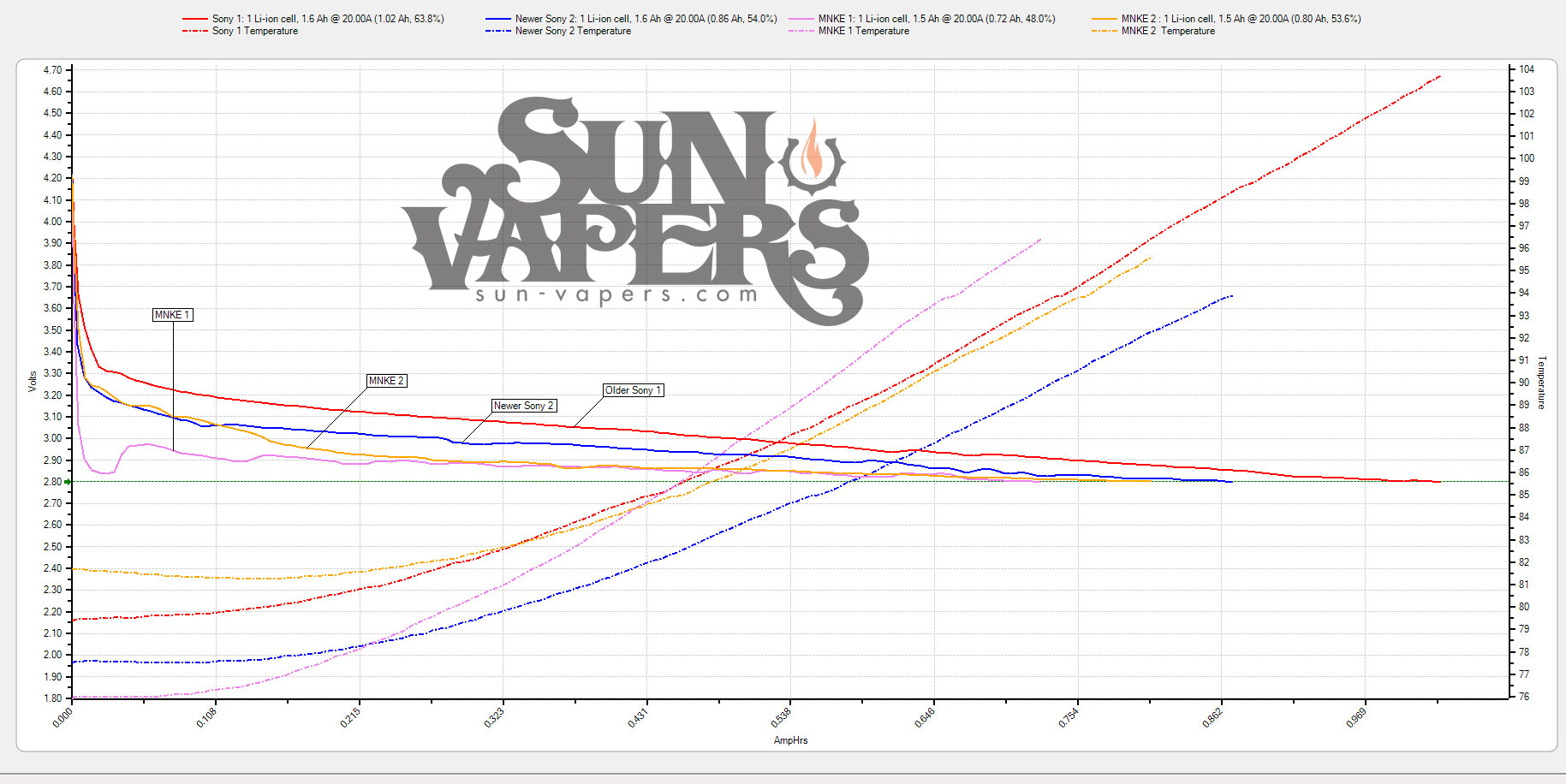 In this test I wanted to see if there was a performance difference when I did the .4 and .2 ohm tests.  It really didn’t reveal much alone, but when I got to the fourth battery I was shocked with a new revalation!!!

If you were to charge a battery and test it within an hour it will have a very wavy line graph.  If the battery rests for several hours you may get a very tiny “no load” voltage drop (due to self discharge from being fully charged 4.22 will be 4.21 for example)  but the output will be greater, smoother and more consistent to other tests.  You can see the batteries that were pulled off a charger and used within the hour.  And then the final Sony that I tested when I had time the next day. Note the purple line.  It was tested nearly 12 hours later from the other 3.

This test illustrates the spectrum of loads at a glance.  The “old sony” was the only one to make it to 25 amps.  The newer Sony and both MNKE hit the cut off of 2.8 volts. These tests are taken chronologically, I probably should have done this test first.  Here it is anyways. Please note the system recorded the last voltage for the MNKE but these are not at 25 amps making them false.   I will adjust this in future tests.

In this test you can see the output a vaper building a really low sub ohm coil would use.

This test I charge all the batteries to the same voltage and let them set for few hours.  Surprisingly the Sony’s performed identical.  I heard this is by design, they are used in laptops and other personal devices so they are matched for safety purposes.  In other words if your using a Sony and I was to test it, it may perform just like these charts!

I decided to look up the recent MNKE stats from one of the Chinese companies selling them and contacted one directly via skype… 25 Amp continuous with 80 Amps burst??? Lets see…

(Above) The MNKE lasted about 16 seconds at 25 Amps.  The Sony flirted on the edge for quite a long time proving its ability under super high loads.

I really wasn’t expecting much from the MNKE brand.  When you say 20Amps continuous and then 60 Amps burst I think to myself what product on this planet has a turbo mode that is 200% of its rated ability.  In fact the longer I think about it this sounds like a huge exaggeration.   As a guy who has worked closely with China I know for a fact they like to exaggerate. Unless there is some explanation I am unclear on, sounds like an exaggeration that worked flawlessly for a while now. Also checking the history of the product, as new batteries hit the market they simply change the stats rather than produce a better battery.  I bought these as 20 Continuous/60 Pulse and now its being sold wholesale as 25A Continuous / 80A pulse?????  What changed?

The batteries also appear to be inconsistent which is something to consider when are paired up in parallel or series.  (according to my quick laymen research) I am not sure how much of an issue this is in the vape world.

Unless a battery expert can explain this, I would say that maybe MNKE might be exaggerating on some of its stats.  The Sony clearly and objectively outperforms it. It does do better than the Efest, but not when the Efest was new.

These do operate at 20 amps.  They are popular and I have not heard of someones MNKE battery exploding.  But they are not the super power beasts that I keep hearing about.  You should not pay AW 1600mah prices for these. 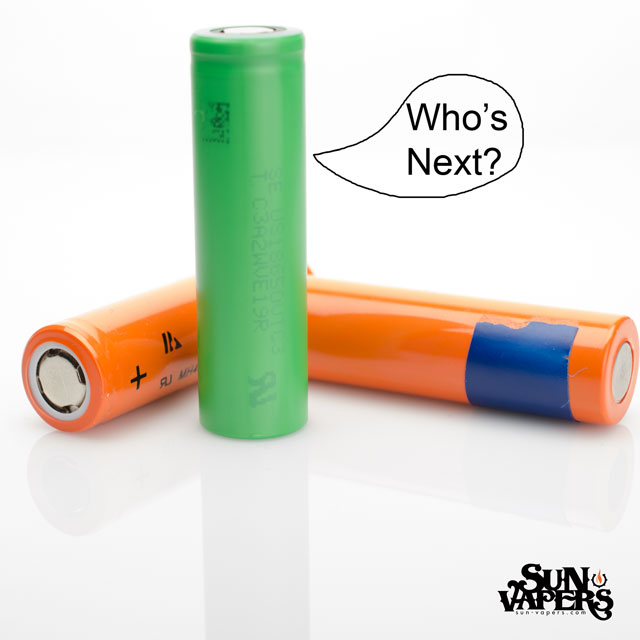 13 thoughts on “The Sony continues to leave a pile of dead batteries in its wake. R.I.P. MNKE”